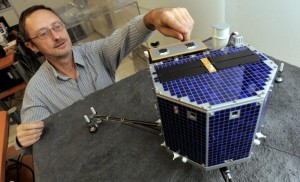 Philippe Gaudon received a PhD in planetology at the Toulouse Science University in 1988 and subcontracted afterwards for CNES, the French space agency, before joining the CNES in 1991 on a remote sensing satellite project.

Philippe has been working on the French contribution for Rosetta since 2001, and has been Rosetta’s project manager for CNES since 2005.

Working on a mission such as Rosetta was Philippe’s very early goal since he’s always been passionate about planetology. In his own words, Rosetta is “a splendid mission”, and he’s looking forward to even more ambitious missions, such as bringing back samples or sending astronauts on Mars.

You can read a lot about him in French on internet, and Google should be able to help you with translating some of these articles if needed!