The third edition of SpaceUp France, the space unconference, was successfully held on Saturday, 7th November and Sunday, 8th November 2015 at École polytechnique. 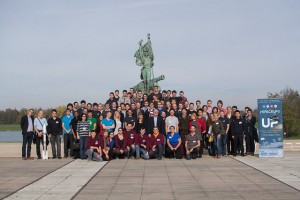 The pre-event took place on Friday, 6th November. Twenty participants – randomly picked between the first to register – had the privilege to attend a guided tour of Airbus DS – Les Mureaux and see Ariane 5’s assembly lines.

The event gathered 134 space fans, with a little more than a third of women. 14 nationalities were represented. It was the biggest SpaceUp France so far!

As the name unconference suggests, most of the grid sessions were carried out by the participants themselves. Their presentations in English were of great quality and sometimes very detailed. The topics were extremely diverse, ranging from telescopes and 3D printing, to astro-modeling, space tourism and Earth observation via satellites.

We had the pleasure to welcome Hervé Gilibert, technical director of Airbus Safran Launchers, for our opening speech.

We also welcomed David Iron, president and founder of Lunar Mission One, who is successfully winning his bet of creating and sending a mission on the Moon using only crowdfunding.

Roland Lehoucq, astrophysicist, professor at École polytechnique and science-fiction amateur shared with us his vision of interstellar travel before giving the opportunity to our participants to give theirs, by inventing an interstellar spacecraft in small groups.

We finally had the honor to count among us a very prestigious guest, Jean-Jacques Dordain, former director general of the European Space Agency. He shared with us his vision and insights of the space industry, portraying his vision of the future of the European space exploration.

The unconference gathered during a week-end space fans coming from different social and professional backgrounds: astronomers and aerospace engineers, bloggers and major players of the space industry, students and professionals, experts and novices. The grid sessions (20 min) and the group meals eased conversations and allowed the participants to meet new people and discover new areas of interest.

The bonds created during the event will forge a strong professional and private network, which may put to use in the years to come. Some identified groups of people willing to promote or test their ideas, others developed new friendships and extended their professional network. Doing unconferences is also a way of making everyone participate. A SpaceUp is an opportunity for professionals and fans to get to know each other. It is a good way for companies to get a feedback on their work but also to understand and analyze new trending ideas (social media, crowdsourcing, open-source…) and apply them to their respective sector.

Finally, a SpaceUp is also a way for everyone to share their projects and their ambitions in the aerospace industry (start-up ideas, summer schools or trips). The event is source of inspiration and motivation and gives the chance to be supported by a community who shares the same passion.

Visibility and Impact on Social Media

The day following the event, nearly 2500 tweets had been sent by 390 contributors, with a potential impact on 4.6 million people. These figures give the idea of the impact of our event on Twitter and they only represent the tweets sent during the week-end. The total reach of the association is even greater.

This visibility is a great success for our SpaceUpX organizing team!

In the media, SpaceUpX was visible on CNES, ESA, Übergizmo, Rêves d’Espace, SpaceUp.org and many other websites. The event even had a page-long article in the space magazine Espace&Exploration.

More than 330 photos were posted on our Flickr pool.

This year’s edition of SpaceUp France brought several innovations to the event. Our team introduced – in addition to the usual T-5 and grid talks – a new set of activities. Our goal was to keep the concept of unconference fresh and innovative for the new public and at the same time present new ideas to SpaceUp connoisseurs. These new activities received a very positive feedback.

SpaceUp France is a French pro-bono association (association loi 1901), created in 2012 by 7 dedicated and committed space-fans all with different professional backgrounds. Despite changes in the team, the spirit endures. This commitment and diversity remain and represent our strength.

The very first SpaceUp was held in San Diego (USA) in 2010. From there, the concept thrived and was emulated all over the world by different teams, united around a single, common goal: to share space. The list of the upcoming SpaceUps worldwide as well as additional information can be found on the following website: www.spaceup.org.

The first SpaceUp France took place in May 2013 at the European Space Agency (ESA) headquarters in Paris. It was shortly followed (September 2014) by a second edition in Toulouse.