You have been waiting for a long time, now we are pleased to present you our first guest : Sylvestre Maurice 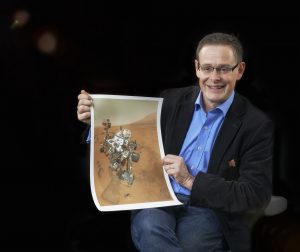 Sylvestre Maurice is a planetologist at IRAP (Research Institute for Astrophysics and Planetology) and astronomer at the Observatoire Midi-Pyrénées. Graduated from SUPAERO in 1990, he is specialist in Solar System exploration and thus took part in several NASA and ESA missions : he studied Saturn’s magnetic field and environment with Cassini’s data; he contributed, with its team, to the discovery of water ice at the Moon’s poles; with the same team, he discovered water at Mars’ equator thanks to Mars Odyssey mission, and also water ice at Mercury’s poles thanks to Messenger mission.

Moreover, he is well-known for being specialist on Curiosity‘s instrument ChemCam. He is now working on its successor for the next rover of NASA mission Mars 2020 : SuperCam .

Mosaic of about 10-12 images acquired by Mahli Camera at SOL 612-613 (April 27, 2014) showing a “selfie” of the rover and inside the Gale crater, with Sharp Mountain in the background (Credit: NASA / JPL-Caltech / MSSS; mosaic by Jason Major)