Eric Lorigny, head of the French Instrument Mars Operation Center (FIMOC), will join us at SpaceUp Paris from Toulouse by video conference! So if you want to know everything about this famous Curiosity’s red-laser-gun, you should not miss that! 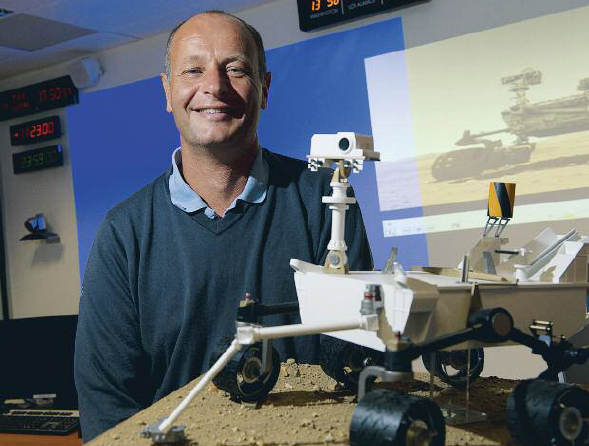 As a young space enthusiast, Eric started to work on this domain as soon as he left school. Starting on the Cassini-Huygens mission in 1992, he also trained astronauts during many years to perform experiments aboard the ISS.

Since 2009 Eric has been working in the French Instrument Mars Operation Center, within the CNES. And as of today one of his today’s best realization is undoubtedly the ChemCam instrument of Curiosity. You know this red-laser-gun which allows the world’s most beloved robot to shoot on Martian rocks and study their compositions!

Close-up of the ChemCam instrument, on top of Curiosity’s mast (NASA/JPL)

As director of FIMOC he is deeply involved into the ChemCam success. Eric and his team are from this rare bunch of guys who can officially set their watches on Martian time for their jobs.

Eric will make a video conference live from Toulouse at SpaceUp Paris on Sunday 26th of May, don’t miss him!

More info on Eric Lorigny and his contribution to Curiosity.